To mark the 45th anniversary since its founding, the Société de transport de l'Outaouais honoured the memory of Antoine Grégoire, a pioneer in public transit. 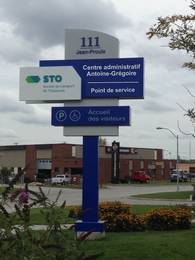 On June 16, pride and emotion marked the STO's 45th anniversary celebration as it named its building the Centre administratif Antoine-Grégoire  in memory of this great pioneer. Antoine Grégoire headed the STO for 15 years and his management skills ensured a bright future for public transit in the Outaouais.

At an event covered by the media and attended by Grégoire family members, including his wife Gabrielle and his children, the STO unveiled the new corporate sign with the new name of the building at 111 Jean-Proulx. STO Chairman Gilles Carpentier presented the commemorative plaques that will decorate the service point entrance near Customer Relations and the interior of the boardroom. The activity, which was also attended by various guests, members of the Board of Directors, General Manager Line Thiffeault, and many executives, both current and retired, managers and employees, was an emotional moment when a commemorative plaque was also given to Mrs. Grégoire.

By naming its head office the Centre administratif Antoine-Grégoire, the STO marks another page in its history. 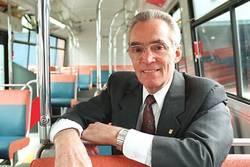 In 1980, Antoine Grégoire was named chairman and general manager of the Outaouais Regional Community Transit Commission (CTCRO), which became the STO in 1991. In 1983, he founded the Association du transport urbain du Québec to promote networking between public transit corporations.

Antoine Grégoire (1924-2010) made a significant contribution to the visibility of the Outaouais and development of the Société de transport de l'Outaouais (STO), as well as all public transit corporations throughout Quebec.

His achievements at the helm of the CTCRO and then the STO include implementation of an automated bus fleet management system (SAGEPAS) and a real-time information system for riders, a first in Canada at the time. Under his leadership, the region also created a comprehensive development plan for rural road networks and public transit.

Antoine Grégoire was a visionary and a pioneer in public transit. He was also an engaged citizen, especially when it came to the economy, the public and the community.

Good to know!
My profile

Sign in or create your profile to receive our newsletter, alerts and enjoy many other advantages!