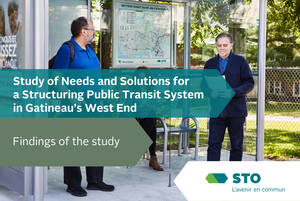 The current transit system serving Gatineau's west end provides transportation for more than 23,000 trips daily. The main destinations for residents in the western part of Gatineau are the downtown areas of Ottawa and Gatineau, as well as their peripheral sectors. The current public transit system is structured around several bus routes that converge primarily on the Aylmer/Alexandre-Taché axis and the Portage Bridge. This axis is subject to dense, unstable traffic conditions, which translates into delays and significant variability in bus travel times, despite the preferential measures that have been introduced.

Gatineau's west end is experiencing strong population growth, which will continue in the coming years. Within the next 15 years, according to forecasts in the city's land use and development plan, the city's west end will see a population increase in the order of 22%. As a result, the transportation needs of the population are rising, which adds pressure to the traffic conditions. Growth in public transit ridership cannot happen unless there is a reliable, efficient, appealing system.

Furthermore, reaching the City of Gatineau's urban planning objectives requires introducing a structuring public transit axis. Such an axis includes a collection of routes providing a level of service that is adequate enough to influence how the area is organized, for instance by favouring the densification of the cities.

Three scenarios and their variations were studied:

Note: On the maps, the Portage Bridge is shown for illustration purposes only. The final recommendation could consider the Prince of Wales, Chaudière, Portage, Alexandra or McDonald-Cartier bridges.

Scenario A: Improvement of the current bus system

Scenario A examines whether minimal investments are enough to meet the population's needs. It also serves as the basis for all the other scenarios proposed. 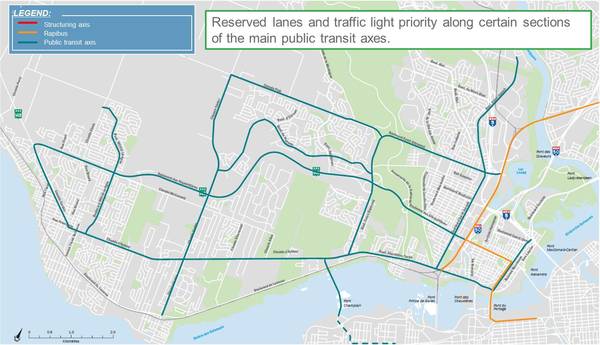 Scenario B: Structuring axis along Aylmer Road and Alexandre-Taché
and variation B1: Use Lucerne behind UQO

Scenario B consists in concentrating greater measures along the Aylmer-Taché axis, while maintaining part of the service on the other axes, which will benefit from preferential measures (reserved lanes, traffic light priority). Variation B1 would use Lucerne behind UQO to bypass the problem of the narrow right-of-way along Alexandre-Taché at this location. 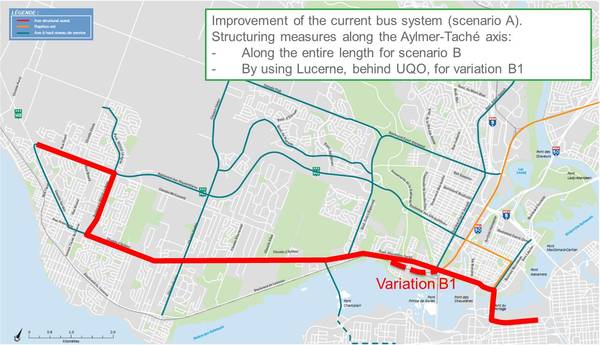 Variation B2: Use the Champlain Bridge to downtown Ottawa

In this variation, services heading to Ottawa would use the Champlain Bridge and connect with the light rail at Tunney's Pasture. Service heading to Hull would use Alexandre-Taché. 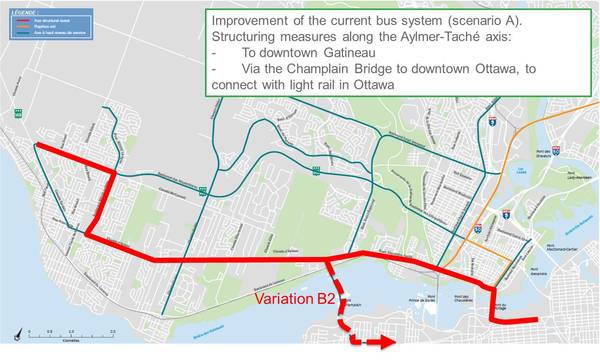 Strong measures would be implemented along the entire length of Allumettières, but buses would continue to use the reserved lanes on Aylmer-Taché and the other axes. 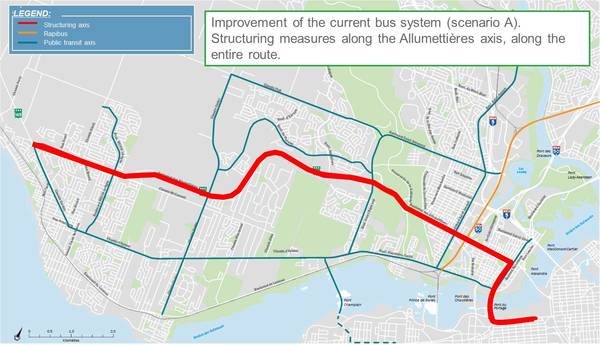 Variation C1: Use McConnell and Plateau

Variation C1 would use McConnell, Vanier and Plateau. 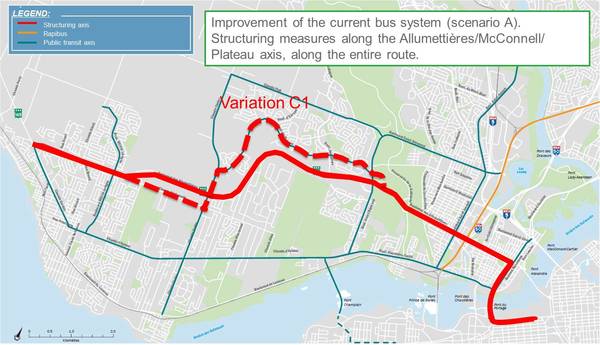 The estimated number of passengers in the medium/long term corresponds to a bus rapid transit (BRT) system. A rail system compatible with Ottawa's light rail would also be conceivable.

The selected scenarios were first analysed and compared using the common basis of a bus rapid transit system, with the help of a multi-criteria analysis. Once the scenario, or combination of scenarios, was selected, the opportunity to implement a tram or light rail mode was studied with the help of cost-benefit analyses. 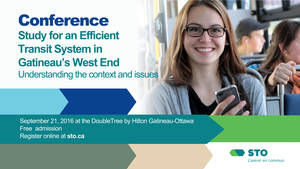 As part of the study, a consultation process allowed the public to express its views. Discussion groups were held in June 2016. A forum was organized in September 2016 to enable citizens to understand the context and issues surrounding the study before voicing their opinions at the public consultation held in October and November 2016. Lastly, a Léger survey conducted in December 2016 made it possible to ask a random sample of Gatineau residents some of the questions asked during the public consultation.

422 citizens participated in the public consultation. 81% of respondents lived in the sector concerned by the study. 72% were public transit riders while 28% did not use public transit.

Several observations emerged from their responses and comments:

The results of the public consultation were taken into account in the analyses of the study. The STO would like to thank the many residents who took part in the consultation and highlight the importance and relevance of their contribution in the course of this study.

The survey was conducted by telephone among 1,003 residents of Gatineau, consisting of 502 riders and 501 non-riders.

The key results arising from this survey are:

Findings of the study

The analysis of current and future needs shows that even if the current system was improved by adding preferential measures, it would still not be possible to reach the minimum targets for public transit performance (travel time and efficient operation of reserved lanes) and increased public transit ridership to enable the city to reach its sustainable mobility objectives. It is therefore necessary to invest in implementing a structuring, reliable, efficient public transit system in the city's west end.

The configuration in the western sector, in terms of roadways without a central traffic axis and the population distribution in the area, makes the choice of one structuring axis over another difficult. The result is that a combination of structuring measures for the Allumettières and Aylmer/Taché axes is necessary, because just one axis is not enough to meet all the needs and ensure adequate performance.

A bus rapid transit system is the preferred mode because it is the most beneficial from a socio-economic standpoint (cost/benefit ratio of 1.8 compared to a ratio 0.5 and 0.7 for a rail mode on one of the two axes, in addition to a bus rapid transit system on the other axis). However, the bus rapid transit system presents a risk of saturation in the longer term, even if use of the existing bridges (Champlain, Chaudière and Portage) is optimized, larger capacity vehicles are used and preferential measures are introduced.

A metropolitan vision of Gatineau-Ottawa

The metropolitan context and importance of interprovincial trips (home-work) mean that it is necessary to aim for a public transit system that aligns well with the neighbouring system in Ottawa, to the benefit of both communities.

This alignment is desired by both cities, as shown by Ottawa's announcement about the possibility that its light rail system cross over to Gatineau and the willingness of both cities to have a metropolitan vision for transportation and to ensure the optimal alignment of public transit

The solution recommended by the study to introduce two bus rapid transit corridors in Gatineau's west end has operational limits, with a risk of saturating the interprovincial bridges and downtown areas of Gatineau and Ottawa in the long term. It would be irresponsible of the STO to end the process at the conclusion of the study without further analysing the stakes and opportunities of implementing a system that aligns better with the one in Ottawa. This improved alignment could include introducing a transportation mode that is compatible with Ottawa's, in addition to a bus service.

In many cities with a light rail system, the decision was based on considerations that accounted for more than just cost/benefit ratios, such as the appeal of this mode compared with a bus rapid transit system or the willingness to redesign and revitalize the routes used and the economic contribution of a more structuring mode. The consultation with Gatineau residents showed that a tram/light rail system or a bus rapid transit system are modes that appeal to them, along with the desire for better alignment with OC Transpo.

The tram/light rail is thus still an option that must be examined in more detail, from the perspective of integrating the systems and the longer term vision for development of the greater Gatineau-Ottawa metropolitan area.

The STO will award an additional mandate financed by the Public Transit.

Until the chosen solution is implemented, because there is an immediate need to improve public transit conditions in the city's west end, the STO plans to meet rider needs by introducing preferential measures, using high-capacity buses and making ongoing adjustments to the service.