The Société de transport de l'Outaouais (STO) is currently undertaking the Additional Study for a structuring Public Transit System in Gatineau's West End in order to improve the Gatineau transit network between Gatineau's west end and the downtowns of Gatineau and Ottawa. This project will also improve the connectivity between Gatineau and Ottawa. As part of this study the STO has held a public consultations to give both Gatineau and Ottawa residents a chance to comment on the options  for  integrating this dedicated public transit system in the downtown of Ottawa that are currently under study. As a reminder, a public consultation was held in June 2019, it enabled citizens to express their opinion, in particular on the scenarios on the Gatineau side.

Note that this project is not a master transportation plan for the two cities and it does not preclude other potential interprovincial connectivity improvements.

The following elements are part of the Complementary Study that is currently underway, and that these may change to some extent, either as a result of the current study or in subsequent phases of the overall project. These elements are presented with the objective of gathering comments from residents of the metropolitan area.

Over the past several years, Gatineau's population has grown significantly, particularly in its west end.

In order to meet this need, the STO is studying the potential for a dedicated public transit system that will effectively link the west of the city of Gatineau to the downtowns of Gatineau and Ottawa.

This study is being undertaken in consultation with the following municipal, provincial and federal stakeholders: 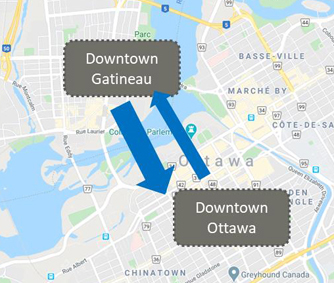 High demand for public transit in both directions.

The dedicated public transit system is important from a metropolitan point of view for both Ottawa and Gatineau. There are approximately 200,000 trips every day between the two cities (approximately 25% of which are on public transit). The following video provides a quick overview of this project.

Studies show that congestion both on the Gatineau and the Ottawa sides will only get worse without a dedicated public transit system from Gatineau. The demand to commute to Ottawa continues to rise and this must be addressed through transit rather than privately-owned vehicles.

Consult the text version of the Complementary Study for information on the proposed dedicated public transit system in the western part of Gatineau video.

Characteristics of the transportation modes being considered

The study assessed different transportation modes. Only options that include either a  tram or bus rapid transit (BRT) were deemed appropriate in view of the project's needs and constraints.

Crossing of the Ottawa River

For the interprovincial link, the dedicated transit system would have to cross the Ottawa River.  The 6 bridges connecting Gatineau and Ottawa were assessed based on the projected destinations of Gatineau riders. The Portage Bridge has been selected as the preferred link between the two cities,. The following video provides an overview of this assessment.

Consult the text version of the Interprovincial Link video.

Connecting to the Ottawa transit system is essential to the success of the new dedicated public transit system. Therefore, the STO and the projects key stakeholders  are reviewing detailed analyses of the options in Ottawa. Listen to the following video for additional information about this aspect.

This detailed analysis revealed that when it comes to moving transit riders efficiently between Gatineau and Ottawa, buses are not enough. Due to the maximum capacity offered by this transportation mode only a scenario with at least one tram component will be viable to meet both medium and long term needs.

Consult the text version of the Integration into Ottawa video.

Components of the Transit Connection on the Ottawa side

The following video describes the main characteristics of the proposed transit connection in Ottawa, including the need to maintain a certain number of STO bus routes along with the tram component (regardless of which transit scenario in Western Gatineau is ultimately selected).

One of the main advantages of the dedicated system is its ability to move a large number of users with fewer public transit vehicles, which reduces the number of STO buses  in downtowns of Gatineau and Ottawa.

Depending on the scenario, the number of STO buses in downtown Ottawa would be reduced by 30 % to 70 %.

Consult the text version of the System Components in Ottawa video.

Options for Integrating the Tram Component into Ottawa

Potential corridors in downtown Ottawa were assessed based on a number of considerations, including:

Importance and prestige of the Confederation Boulevard

The studies conducted, including the above considerations, identified two main options for integrating the tram component:

Each of these options are described further below.

Regardless of which corridor is selected, the number of trams stations and their locations are critical to the efficiency of the proposed connection in Ottawa. The following video presents the different aspects that have been taken into consideration to determine the number of stations required, as well as the main conclusions.

Consult the text version of the Number of Tram Stations in Downtown Ottawa video.

Description of the Integration Option

Wellington Street has been identified as the preferred corridor for an at-grade integration of the tram. Two scenarios for this corridor were developed:

Although for each of these options, three tram stations would best meet the needs and objectives of the overall project, the many compromises necessary to fit each of them along this corridor is one aspect of this study that is still under review.

The design of a tram on Wellington Street would have to be in line with the needs, functions and esthetics of Confederation Boulevard, including its function as a ceremonial route and its symbolic role as a place of national interest. This could involve specific features, such as minimal infrastructure or running the tram on batteries instead of overhead catenary wires. 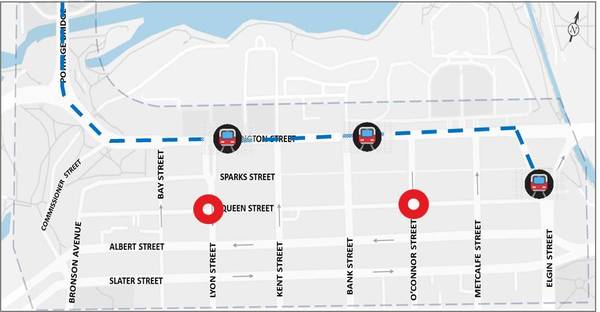 Impacts of the Integration Option

Two possible scenarios are under review for the Wellington corridor.

The stations would be arranged in a minimalist style. An example of an existing tram station with traffic and high pedestrian density is the Place de la Bourse station in Bordeaux, France. 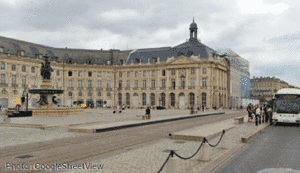 An example of an existing tram station without vehicular traffic is the Nationale station in Tours, France. 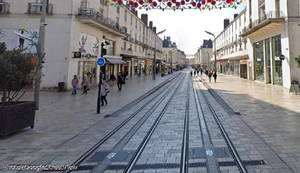 There are currently 8 access points to and from Parliament Hill on the north side of Wellington Street. In order to integrate the tram on Wellington Street while remaining as much as possible within the available right-of-way, these accesses will have to be further studied in depth in order to confirm the layouts that will ensure efficient traffic circulation to and within Parliament Hill.  It should be noted that integrating a tram on Wellington Street will likely significantly impact many of these accesses in order for the tram to run efficiently and safely.  This impact to the Parliamentary accesses may be deemed too significant for the functions of Parliament Hill which could affect the feasibility of this option. 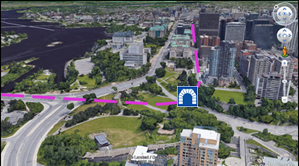 Description of the Integration Option

Sparks Street has been identified as the preferred corridor for a tunnel integration of the tram. 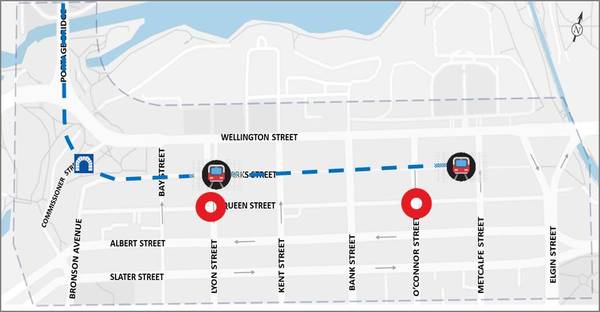 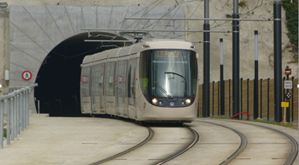 Impacts of the Integration Option

The various integration options would have different impacts on traffic in downtown Ottawa. The two scenarios with a tram on Wellington Street involve a reconfiguration of the existing traffic lanes, and would therefore see traffic redistributed to other streets.

Traffic studies, are currently being carried out to measure the impacts of the proposed modifications. The integration of a tram would attract more users to public transit and therefore reduce the number of vehicles coming to downtown Ottawa, which in turn limits the traffic pressure exerted on several other corridors in the city center, as compared to not having a tram. Thus, traffic analyzes show that, in general, each scenario with a tram would improve future traffic conditions compared to the status quo.

Evaluation of Each Scenario

The performance  of each integration option has been compared to a scenario described as “Status quo”, which represents the situation in the year 2031 without a tram from Gatineau. This comparison allows for further evaluation of each option. The main characteristics of the status quo and  integration options are as follows:

In brief, the status-quo would not be viable in the long term. In order to ensure efficient transportation in light of the projected population increase, a reliable and efficient public transit system is needed.

The 3 tram scenarios would deliver efficient transportation, each with advantages and drawbacks.

Participating in the consultation

The public consultation has now ended. The deadline date for submission of comments was July 19, 2020.

If you have questions, you can contact us at etudedelouest@sto.ca. Questions received will be summarized with answers provided in the Q&A section (which will be regularly updated during this consultation).