Over the past several years, Gatineau's population has grown significantly, particularly in the city's west end.

A reliable and efficient public transit system is required to:

The complementary study is divided into four main stages:

5 scenarios were identified through the study:

In order to provide an interprovincial link, the dedicated transit  system must cross the Ottawa River from Quebec to Ontario.

The 6 bridges connecting Gatineau and Ottawa were assessed based on the projected destinations of Gatineau riders. 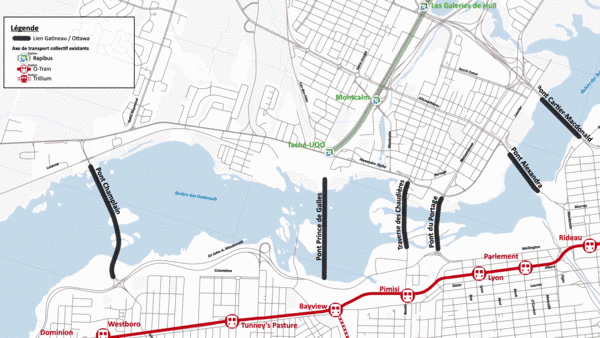 This bridge is too far to the west and would mean a significant detour for riders in the Hull sector going to downtown Ottawa.

Nonetheless, the Champlain Bridge will always be used for regular STO buses heading to Tunney's Pasture.

The Prince of Wales Bridge

This bridge would not serve the primary function of this specific study.  It is also too far to the west and would mean a significant detour for riders going to either downtown Gatineau or downtown Ottawa.

This option is not feasible as it would require that riders heading to downtown Ottawa would have to transfer to the O-Train system at the Bayview station. Over the longer term, Ottawa's O-Train line 1 would not have capacity to carry everyone from Gatineau as well as everyone from the western parts of Ottawa.

The Prince of Wales Bridge however remains a potential future secondary transportation link between Ottawa and Gatineau.

Surrounded by several buildings, some of which are heritage buildings, the bridge  is not large enough to insert a dedicated public transit corridor.

This bridge is too far to the east and would mean a significant detour for riders between the Aylmer/Taché and Allumettières corridors, and downtown Ottawa. It will continue to accommodate regular STO buses. but would not serve the needs of this specific study.

This would be a detour for riders from the Aylmer/Taché corridors heading to downtown Ottawa. The Alexandra Bridge does not yield enough benefits to justify the challenges and costs of integration, particularly on the Ottawa side.

However, the joint use of the Portage and Alexandra bridges could be a solution for future system growth.

Additional solutions were also considered, but eliminated, such as a tunnel under the river, the construction of a new bridge or independent transportation between the two downtowns. Given that the technical challenges and costs would be excessive, these solutions were not pursued.

This would be the best option for most riders. The Portage Bridge has sufficient space , particularly if it were to accommodate a tram. It would deliver riders the primary destination of downtown Ottawa.  It would also accommodate transfers to the O'Train system, in the vicinity of the Lyon station for other destinations.

The Portage Bridge has been chosen because it is the optimal link for an effective dedicated transit  connection between the two cities, especially their downtowns.

The STO and its partners are therefore conducting detailed analyses of the options in Ottawa.

To begin, the number of public transit riders was estimated to determine the number of buses or trams that would be needed to carry them. Currently, approximately 3,500 public transit riders per hour cross the Portage Bridge during the peak period. An increase to between 7,000 and 7,500 riders per hour is expected for the peak periods over the next 15 years. Moving these passengers would require at least:

This would mean too many buses in downtown Gatineau and Ottawa, and for the Portage Bridge.

Only a transportation mode that could move more riders could meet the transit needs over the medium and long term. With a tram model, over the next 15 years approximately 25 trams an hour would be needed, which is entirely feasible.

As a result, only the scenarios with at least one tram component were carried forward for further assessment. These are:

This study therefore proceeded around those three scenarios.

For integration into downtown Ottawa, each of these scenarios would include a combination of a tram component from Gatineau and a limited number of STO bus routes.

A system which includes a tram requires the straightest possible route. As well, the new transit system must align with the City of Ottawa's vision for its downtown, which includes:

After reviewing different options, the corridors selected for further study of the tram component are:

Each of these options have their own pros and cons.

However, this corridor has several uses competing for space, requiring compromises in terms of the layout of the street, including:

The underground tram option running along Sparks Street would allow for a different configuration of Wellington Street, including significantly fewer transit vehicles as compared to today's situation.

Connections with the underground O-Train stations would be more direct, and the tunnel stations and their connections provide weather protection for commuters. This transit tunnel would complement the rejuvenation plans for Sparks Street.

However, the tunnel would be more expensive and more complex to build than an above-ground solution, but there will be minimal disruption to surface traffic during construction, in comparison.

One of the study's main objectives is ensuring efficient service for the Gatineau and Ottawa downtowns.

This means enabling riders to easily reach their destination, either on foot if the destination is close to a station, or by transferring to the O-Train's Confederation Line for other destinations. The number of tram stations and their locations are therefore critical to the efficiency of the new public transit system. The number of stations will be contingent on different factors, including:

During the STO's 2019 public consultations with Gatineau residents, 58% of respondents indicated that they would like to be able to get beyond the Lyon O'Train station in Ottawa using the new dedicated transit system serving western Gatineau.

The final destination of most Gatineau residents is between Lyon and Elgin streets.

It has been determined that if the new dedicated transit system had only one tram station in the vicinity of Lyon Street, all of the boarding and disembarkations would have to take place at that station, which would mean a very high number of riders in one single location. What's more, many riders would still be far from their ultimate destination. They would have to transfer to the O-Train, and take that for one or two stops, which would greatly extend their travel time. Although a single tram station in Ottawa would cost less and require less construction work, this option was not selected  because it would not provide quality service to the public transit users.

Adding a second tram station near O'Connor Street would increase the number of destinations within walking distance and provide two options for transfers to the O-Train: Lyon Station and Parliament Station.  However, several users would still not be within walking distance of their final destination, and would briefly have to transfer to the O-Train. The option of adding a second tram station in the vicinity of O'Connor Street would be an improvement over the single station option, but the advantages would still be limited.

Finally, there is the option of three tram stations, involving the addition of a third one farther east. Having three stations would allow several riders to walk to their final destination instead of having to transfer to the O-Train, thereby cutting down on their travel time. Riders would be split up among 3 stations, which would improve waiting, boarding and disembarking conditions.

The Wellington Street corridor could accommodate 3 stations, although there would have to be some compromises made in terms of the street layout.

In terms of the tunnel under Sparks Street option, it has been determined that it could be extended closer to Elgin Street. However, it would not be operationally practical to have tram stations at both O'Connor Street and Elgin Street because they would be too close to each other. Thus, two stations are being proposed for the tunnel option. One would be at Lyon Street, and the other one would be between O'Connor and Elgin Streets. Riders could access either of these two streets via pedestrian portals, which would protect them from inclement weather. 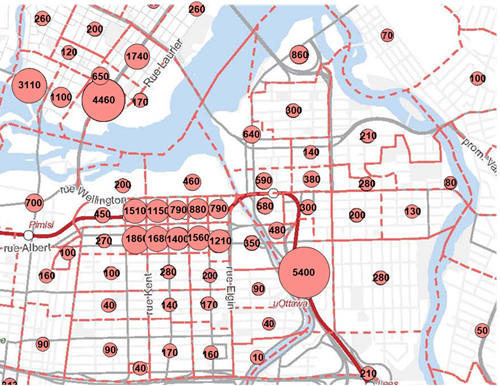 If one of the Hybrid scenarios was ultimately chosen, buses would be required to accommodate the riders in the western sector along the corridor served by a bus rapid transit system.

Regardless of which scenario is chosen for the western sector, other sectors such as Gatineau and Hull currently need a significant number of buses to get riders to downtown Ottawa. That need will increase in the coming years.

Studies were done to determine the most efficient way of getting those riders to downtown Ottawa.

Several options were examined, including: transporting all the riders that are not close to the new tram by bus to downtown Ottawa,, or taking everyone there by tram only.

If only trams crossed to downtown Ottawa, all riders from the Gatineau and Hull sectors would have to transfer to it in downtown Gatineau.

If a hybrid scenario was chosen, riders along the corridor served by bus destined for Ottawa would also have to make an additional transfer in downtown Gatineau onto the tram.

One or more stations would be needed in downtown Gatineau just to accommodate the significant volume  of all the transfers. As well, several riders would then have to transfer again to the O-Train if their destination is beyond downtown Ottawa.

Finally, additional tram cars would have to be acquired to accommodate the large number of riders traveling the short distance between the two downtowns, which would mean significant additional costs.

This option was discarded because it would overly penalize riders and present significant challenges in terms of layout and costs.

On the other hand, if in addition to the trams, all other bus routes continued to downtown Ottawa directly, the Portage Bridge and downtown Ottawa would soon once again be saturated by the significant  number of buses on the road. This option was therefore also discarded.

The best compromise in terms of ensuring quality service and efficient operations is one where only a certain number of buses would continue into downtown Ottawa directly.

Therefore, only a portion of the main bus routes, such as those running along the Rapibus or the main corridors to Hull, would continue into Ottawa.

On the Portage Bridge, buses would use the tram lanes and then, once in downtown Ottawa, would turn around on one of the three potential loops. Some buses would also continue to reach downtown Ottawa via the MacDonald Cartier Bridge.

Comfortable transfer stations would be set up for the bus routes stopping in downtown Gatineau to enable efficient transfers to Ottawa via the tram. 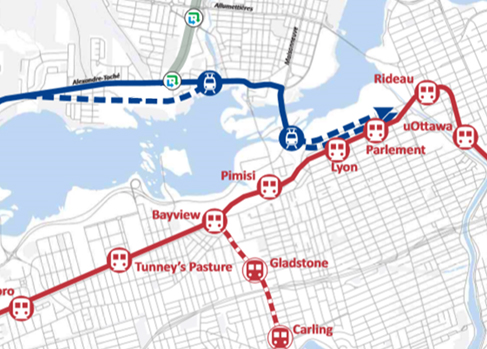